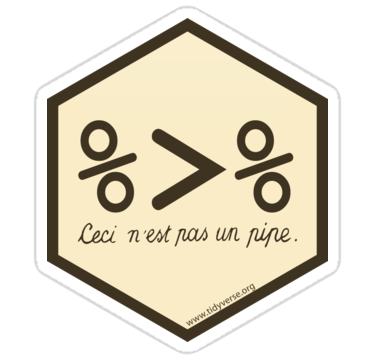 Pipes are a way to order your code in a more readable format.

One way you could do this is by creating a new object at every step and using that object in the next step. This is pretty clear, but you’ve created 6 unnecessary data objects in your environment. This can get confusing in very long scripts.

You can name each object data and keep replacing the old data object with the new one at each step. This will keep you environment clean, but I don’t recommend it because it makes it too easy to accidentally run your code out of order when you are running line-by-line for development or debugging.

One way to avoid extra objects is to nest your functions, literally replacing each data object with the code that generated it in the previous step. This can be fine for very short chains.

But it gets extremely confusing for long chains:

The pipe lets you “pipe” the result of each function into the next function, allowing you to put your code in a logical order without creating too many extra objects.

You can read this code from top to bottom as follows:

You can make intermediate objects whenever you need to break up your code because it’s getting too complicated or you need to debug something.